By clicking “Accept All Cookies”, you agree to the storing of cookies on your device to enhance site navigation, analyze site usage, and assist in our marketing efforts. View our Privacy Policy for more information.
PreferencesDenyAccept
Call Us: 022 069 7534
Email: info@affordablejewellerysupplies.co.nz

I was approached by a customer a few weeks ago who sent me pictures of some daisy earrings and asked me how I would make them.  I told her that there were two ways and she asked if I would create a tutorial for her.

Here’s what you will need to make one pair of earrings:

Thread the Emerald beads onto the Fireline then run the needle back through the beads from the tail end making a loop.

Pull the thread tight to form a circle.

Thread the needle back through all of the beads to reinforce the circle.

Pull it up really tight and tie a knot in the two ends.

Thread on the white bead and pull the thread across to the opposite side making the bead sit in the middle of the circle.

Thread the needle down through the three beads on one side of the circle.

Take the needle back up through the white bead and down the three beads on the other side.

Reinforce by threading the needle back up through the white bead and down the sides again.

Tie a knot in the two ends. Thread the needle back up through two of the side beads and cut the thread nice and close.

This process is the same for both methods.

Open the jump ring using both pairs of pliers.  If you haven’t used jump rings before, watch this video. You will need to open it quite wide.

Thread the six emerald beads onto the wire and bend it up to make a loop.  Cross the wires over at the top.  If the loop isn’t circular just manipulate the wire until it is.

Hold the crossed wire between your thumb and forefinger and give the loop one twist.

Pull one of the wires across the circle to the opposite side. Pull it really tight so there’s no loop in the wire at the twist.

Thread on the white bead, and place it so that it sits within the circle.  Pull the wire to the back.  Trim the wire between the white and green beads.

Using the chain nose pliers, tuck the end in between the beads.

Repeat that process for the other end of the wire, making sure that both of the ends are tucked well in and won’t snag of anything.

Add the jump ring and earring post in the same manner as described for the thread version above.

Obviously whichever method you chose, you will need to repeat it for another earring. 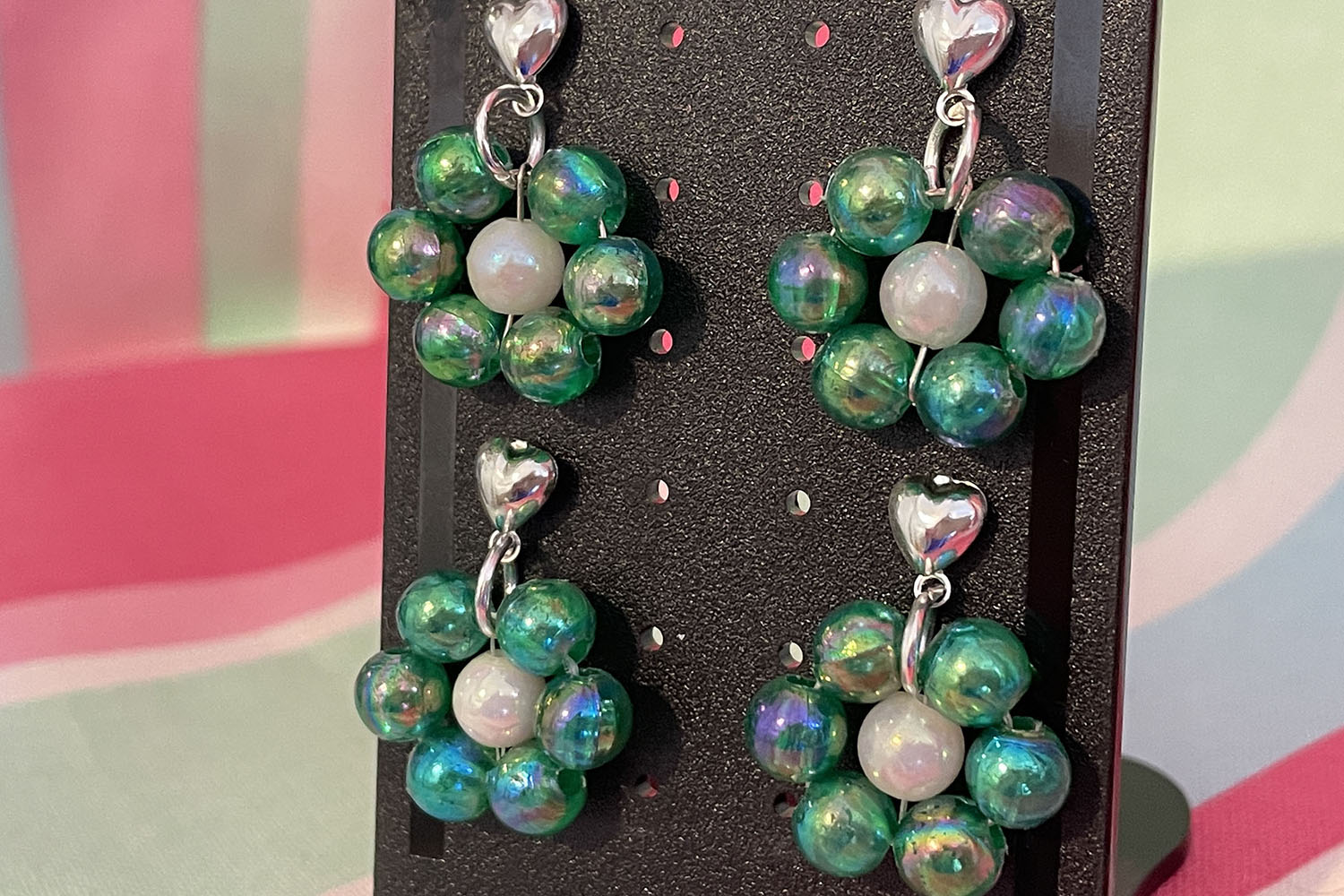