How to Make a Beach Anklet

While it’s starting to get colder here, I’ve been thinking about hot summer days, sitting on a beach. Don’t get me wrong, I quite like the winter and all its coziness, but I also like the summer and what it means for my lifestyle.

These charms arrived last week and so I decided to make some beachy themed jewelry.

If it’s summer in your part of the world, you might like to make one of these beach themed anklets, or perhaps, even if it’s cold outside, you can look forward to wearing it when the weather gets warmer.

What is an Anklet?

Well, basically an anklet is a bracelet that you wear around your ankle – pretty simple. It can also be called an ankle chain. I’ve called mine a beach anklet because it has a beachy theme.

Here’s what you will need to make this beach anklet.

Add Jump Rings to the Charms

If you have never opened and closed jump rings before, thenI suggest you watch this video.

Squeeze the crimp bead with the chain nose pliers to close it.

Thread the beads on for strand one using the layout diagram below. When you have threaded 3-4 fours, trim off the short end of the tiger tail. Thread on the remaining beads for the first strand.

The diagram below shows the first half of each strand. Repeat for the second side.

Open the jump ring on the other end and add the other part of the clasp. 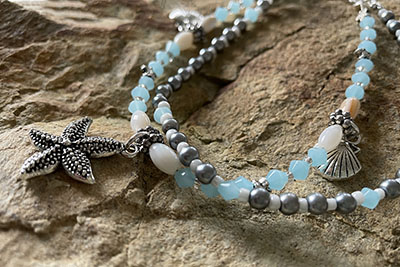