How to Make a Cubes and Daggers Necklace

Not all beads are round! In fact, beads come in all shapes and sizes. This week I used these stunning Czech glass dagger beads to make this beginner necklace.  I also used some glass cubes and metal round beads, so there’s a really blend of shapes.

You are probably aware that beads also come in all sorts of colours.  I love the colour of these Czech daggers – it’s called Crystal Capri Gold but it’s actually more of a bright copper colour.  It works so perfectly with the dark green of the glass cubes too.

This project is basically a stringing exercise so it’s a really good one for beginners.  Imagine, if you’ve never made jewellery before, creating something this spectacular on your first try.  You’ll also learn how to use crimp beads to add a clasp.

Here’s what you’ll need to make this spring bracelet:

Put the beadstopper on one end of the Tiger Tail.

Start by threading the centre beads following the design below.

Continue in this manner until you have used all the daggers, ending with a black ball.

Put both ends of the Tiger Tail into the bead stopper and put the stringing aside.  Divide the remaining black balls in half.  You should have a twenty one 3mm ball beads in each pile. Use one pile for each side, interspersing them with the green cubes.  Do this so you don’t have to count the beads as you put them on.

Using the same layout of ball and cube, string the remaining beads onto the Tiger Tail, starting with a green cube and ending with a blackball.

Remove one strand from the bead stopper. Thread one crimp bead onto that strand, then the clasp. Thread the Tiger Tail back through the crimp bead and through 3-4 of the beads.

Pull the thread until the crimp is close to the beads, ensuring that there is enough room for the clasp to move.

Using the chain nose pliers, squeeze the crimp bead until it’s flat. Pull the Tiger Tail to ensure that it won’t move inside the crimp.  If it does, squeeze it again.

Trim the short end of the Tiger Tail off as close as possible and push the end into the next bead. Run the beads back up towards the crimp so that there’s no gaps.

Close the jump ring carefully ensuring there is no gap. If you don’t know how to do that watch this video.

Thread the remaining crimp onto the other end, then put on the jump ring and thread back down through the crimp.  Crimp as you did for the other end. Take your time doing this to ensure the beads are all lined up against each other and there aren’t any gaps.

Trim off the excess Tiger Tail.

Now you have a beautiful Cubes and Daggers necklace – you’ll be the envy of all your friends. 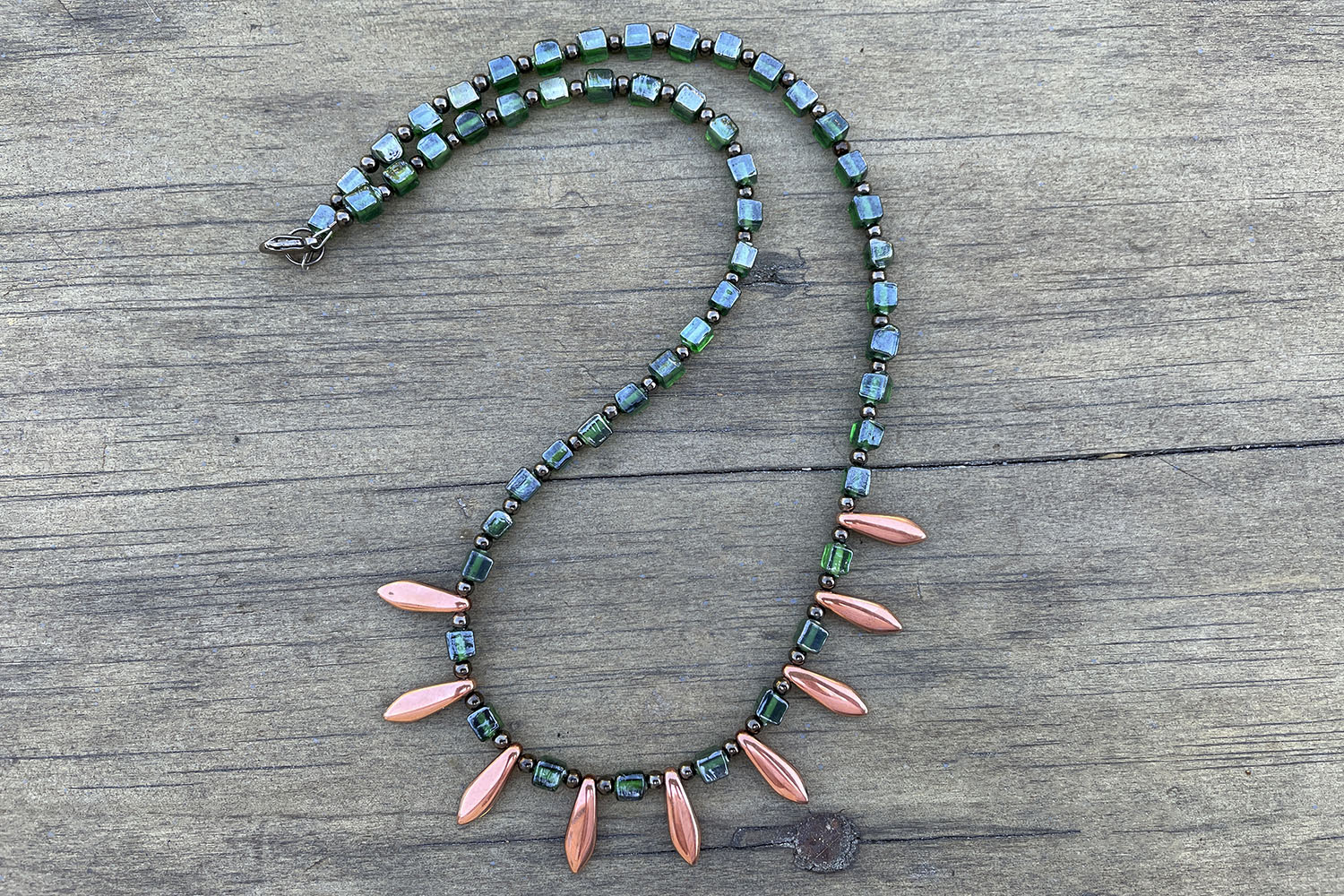